Could healthy afternoon snacks make a difference to an adolescent vegan lifestyle?

According to recent data1,2 around 1% of 15–24-year-olds in the UK identify as vegan, and a further 1% claim to never eat meat or animal products.  Dietary vegans choose not to consume animal products but may continue to wear clothes or use products that contain ingredients derived from animals. Whereas veganism, as defined by The Vegan Society3 is, “a philosophy and way of living which seeks to exclude—as far as is possible and practicable—all forms of exploitation of, and cruelty to, animals for food, clothing or any other purpose.”. This distinction highlights that whilst a person may not identify as vegan, they may follow a diet consisting of only vegan-friendly foods.

This dietary trend continues to grow.  A recent report by a large UK food retailer4 highlighted a surge in the movement of sustainable diets, whereby people choose meat-free and vegan diets due to environmental concerns rather than solely for ethical reasons such as animal welfare. Health was another reason for making the switch to a diet without meat, with 45% of those surveyed believing it to be healthier to be vegetarian or vegan.  This trend was reflected in UK dietary changes in recent years, with declines in the consumption of both meat and dairy products: the percentage of people eating dairy once a week decreased from 97% to 92% between 2012-2018, and beef, lamb and pork consumption dropped by 20% during the same period5. With such a fast-growing trend, retailers have been quick to develop their own range of vegan products to meet the demand. Indeed, 1 in 6 new UK food products had a vegan or no animal ingredient claim in 2018, double the amount launched in 20156. 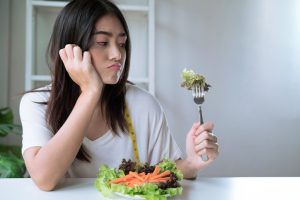 With vegan and plant-based diets continuing to grow in popularity amongst the younger age groups, and 8% of parents in the UK choosing to raise their children as vegan7, it raises the question: is a vegan diet suitable for the 11–18-year-old age group? A vegan diet removing large groups of food (i.e. eggs, dairy, fish, poultry and meat) might create a greater risk of nutrient deficiency due to a lack of supply from dietary sources or lower bioavailability (the body’s ability to absorb the nutrient). This is particularly true of protein quantity and quality, iron, zinc, selenium, calcium, riboflavin, vitamins A, D, B12 and essential fatty acids8.  With the additional requirements needed by adolescents for growth and changes during puberty, such modifications to dietary intakes require careful considerations to ensure that nutritional requirements can be met.

Studies on the effect of vegan diets on adolescents are lacking, with more research focussed on the long-term health outcomes of vegetarian and vegan adults9. However, a 2021 study10 that looked at the nutritional status of vegan and vegetarian youth in Germany aimed to provide some insight. Regarding the nutrients of concern, those following a vegan diet were found to have the lowest calcium and vitamin B12 intakes when compared with vegetarian and omnivore participants. In addition to this, whilst iron intake was the highest in the vegan group, biomarkers used to determine nutritional status found iron levels were the lowest in this group, an indicator that high intakes cannot compensate for the lower bioavailability of plant iron. Supplementation was highest amongst vegan participants, particularly in vitamin B12 (88%), which appeared to be adequate in avoiding deficiency despite only 4% achieving B12 recommendations through diet alone.

Despite some of these results, the study did not indicate specific nutritional risks among vegans compared to omnivore children and adolescents, suggesting a vegan diet can be feasible for adolescents with planning and additional support of some supplementation. It also highlighted some positives when compared with an omnivore diet; vegan participants had lower intakes of free sugar and saturated fat, in addition to the highest intakes of dietary fibre, which is shown to reduce the risk of some non-communicable diseases11.

As shown in the infographic above, there are ways to incorporate good vegan sources for some of the more at risk aforementioned nutrient groups. A healthier afternoon tea can easily be made vegan by doing some snack swaps that are full of the nutrients we need.  Protein is abundant in a vegan diet, but it is important to eat a variety of different sources such as tofu, pulses and legumes to ensure nutritional needs are met. For a way of example, a great snack option would be to use mashed chickpeas as a sandwich filler, combining it with other vegetables for extra flavour and nutrients.  The chickpeas and the bread together will supply a complete range of amino acid.

Fortified products are another great way to help make the swap to a healthier vegan diet, particularly in alternative dairy products fortified with calcium, B vitamins, and iodine.  Those turning vegan should always check the label and choose a fortified option; plant-based ‘yoghurt’ is great to use as an ingredient in a vegan cake or as a tasty topping on nuts and cereals (cereals are also often fortified with iron too).   A mere 2½ tablespoons (100 g) of fortified soya yoghurt will add 15 % of the of Calcium and 7% of the iodine needed in one day.

Nutritional yeast is another popular vegan staple that can easily be incorporated into snacks, adding a tasty cheesy flavour to foods and often fortified with vitamin B12.  A snack made with one teaspoon of nutritional yeast can add 25% of Vitamin B12 needed for one day.

It is clear there are lots of vegan options to incorporate the necessary nutrients, but it may take some planning and additional support8. For adolescents that may not have the confidence in nutritional knowledge or cooking ability, creating a healthy vegan afternoon tea is a great way to learn more about nutritional requirements and easy swaps for day-to-day snacking.

Overall, it appears that this dietary choice is going to continue to grow in popularity, and vegan adolescents are a group that require further research to determine any long-term effects on health. With so many significant changes to the body that occur during this time, including growth and further development of bone mineral density, it is crucial that nutritional needs are met, with support and education available for both parents and children to ensure that deficiency is avoided.